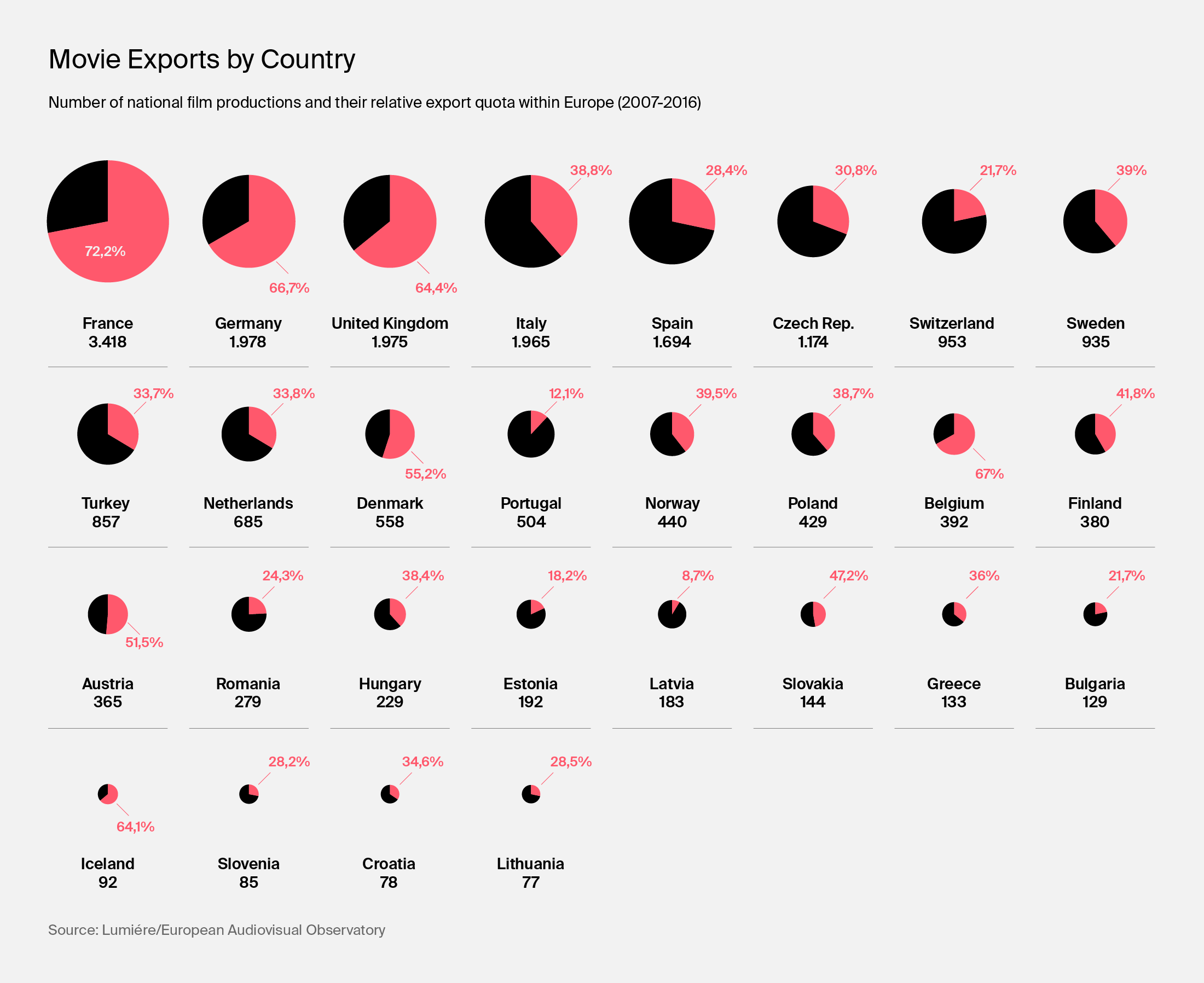 The infographic offers an overall overview of national film production in Europe between 2007 and 2016. The 28 graphs, one per country, indicate in black the total of national production over the time period examined, and in pink the percentage of works exported within the European market.

In this context, Italy ranks fourth among the five most productively developed film industries in Europe, preceded respectively by France, the United Kingdom and Germany, and ahead of Spain for just over 250 units.
If in relation to the number of productions, with a total of 1,965 units, Italy is consolidated among the most competitive productions, with data in line with those of Spain (1,694), the United Kingdom (1,975) and Germany (1,978), the values radically change in relation to the foreign distribution of the works.

In fact, Italian exports stop at 38.8% of the total produced: firmly above the Spanish figure (28.4%), but well below that of the United Kingdom (64.4%) and Germany ( 66.7%). The gap becomes even wider in comparison with the French market, which compared to 3418 films made – almost double the entire Italian production – has an impressive export figure equal to 72.2% of production.

Italian productions, performing in the domestic market, lose competitiveness on a European scale: a fact common to almost all the countries analyzed. In fact, of the 28 nations examined, only 7 manage to export more than 50% of their production to Europe, consequently amplifying the commercial scope of the individual film.

The latter, impressive figure, can find partial explanation in the extreme similarity and in the constant artistic-productive cooperation between the small Belgian and French industry, with which it shares the same linguistic and spectatorial basin, consequently benefiting from the same appeal in foreign markets .

A similar explanation is possible for the positive Austrian value, determined by the geographical and linguistic proximity to Germany. According to this perspective, the cases of Denmark and Iceland appear more singular that although they do not both have direct support in the major European industries or a conventional linguistic facility such as that of the United Kingdom, they reach high percentages, surpassing, in the Nordic block, even a Sweden, stops at 39% of exports on 935 works produced, historically more solid and constant from the cinematographic point of view.